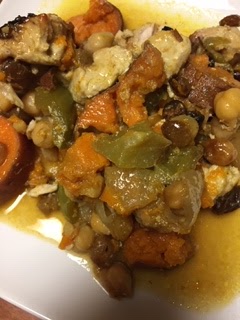 Is it the end of February already? About the middle of the month, each year, I wonder why I am doing this to myself! But, then, as the month nears an end I say, “Slow down! I have more recipes than days left in the month!” I guess that’s the good news. It means that I chose the right category to develop yet again, right? At least I hope I did. What did you think of this year’s recipes?

So about now, I also start thinking about next February? What would you like to see a batch of recipes for? I have some ideas, but I’d love to hear from you about what you’d like to see we tackle.

Also, if you haven’t already done so, go digging around in my “attic” for this blog and explore some of the other February categories in past years. I have been doing this every year since 2012. Nine years of February recipes! Hmm. I should have a really special category for my 10th anniversary next year, right?

Today’s recipe comes from North Africa. I cut the original recipe in half since I no longer feed a horde. DH and I are fine with leftovers; they make an easy, fast dinner another night. But we really, really don’t want LEFTOVERS, if you know what I mean.

Did you know the Crock-Pot goes back to 1940? I remember when I got mine in the early 70’s. It became this busy teacher’s best friend! Why am I bringing this up? Well, Irving Nachumsohn gave a modern spin to a millennials-old cooking method. Our great-greats back to forever ago, slow cooked food in earthenware pots. Nachumsohn wanted the same savory-ness of slow cooking but made easier for people who no longer had open fire cooking. From stews to beans to tenderizing cheap cuts of meat, the Crock-Pot offered some kitchen freedom to home cooks.

Of course, since those early days, many manufacturers have produced slow cookers. I have two, one large and one small, depending upon what I am preparing. And sometimes I am using both if cooking for a crowd. I also use a slow cooker to keep mashed potatoes hot for holiday meals when all the burners are burning!

In Morocco, a tajine or tagine is the name of the earthenware pot used for slow cooking the old-fashion way. This recipe for Moroccan Chicken Tagine translates the old recipe into today’s slow cooker instead. Here’s one type of tagine.

This is delicious with couscous and garlic sautéed spinach! I only made minor changes to the recipe from the “Mediterranean Living” site (like I changed water into wine!). 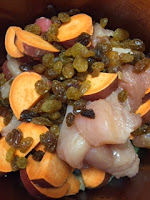 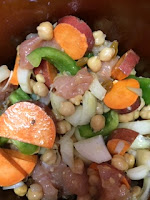 Cook on high for 4 hours or low for 6 hours.

DH’s Rating: 5 Tongues Up
“What do you call this? A stew?” Umm. Maybe. It’s certainly chunky and has little liquid, but the liquid is, well, liquid, not thickened as in stews. “It’s got sweetness and heat. What’s in it?” The sweet potato and raisins give a sweet under-taste that is counterbalanced with the heat from the ginger-cumin-turmeric spices. Really interesting flavors that he liked.